Nothing feels better than taking your best friend on a hike into the wilderness. Regular hiking with your dog is crucial since it floods his senses with sceneries and odors that industrial cities lack. And since dogs can go on barefoot walks around the neighborhood, many owners think hiking boots are rather absurd.

Do dogs need hiking boots? Absolutely yes! Their paw pads aren’t built to endure slippery terrains, scaly rocks, or dense forests. Without the right boots, you’ll be exposing him to the risk of serious infections.

In this article, we’ll take a deeper look into this subject. I’ll also recommend the best hiking boots you can currently find on the market.

The Dangers of Hiking Barefoot

To better illustrate the importance of boots, let’s see the dangers that might be waiting for your dog in the wilderness.

Dogs are descended from wolves, right? Shouldn’t this make them fierce enough to roam over any terrain without problems? Not necessarily!

See, evolution works by a simple rule: use it or lose it. When we were entrusting dogs to herd livestock, guard farms, and hunt wild animals, their paws were still tough enough to endure harsh terrains.

But now, after domestication and apartment life have heavily kicked in, dogs’ paw pads have become way less rugged.

Most breeds can’t withstand jagged rocks, coarse dirt, sharp logs, and spiny cacti. As a rule of thumb, it’s better to avoid taking a chance — if you can’t safely walk barefoot on a particular surface, neither should your dog!

Since they’re usually hairless, paw pads are vulnerable to extreme temperatures. In the summer, the scorching sun will make your dog feel like he’s bouncing off bits of lava!

Unlike physical cuts, thermal burns have a higher likelihood of developing infections. In severe cases, vets will bandage your dog’s feet for weeks before he can normally go about his life again.

Frostbite, on the other hand, can be more dangerous. When the temperature falls below 32 °F, your dog’s paws will be too cold for the blood to flow through them. Blood deprivation starts with minor tissue damage and skin peeling, but it may quickly escalate and pose a risk of amputation if it lasts for a long time.

Lucky for us, the last time plague worried the Americans as a major pandemic was in the ‘20s. However, the West is still suffering from frequent cases, according to the Centers for Disease Control and Prevention (CDC). Their latest report revealed that the plague often shows in the following areas:

If you’re living in any of these areas, your poor pooch can run into one of the fleas that carry the plague. Once he’s bitten, he’ll start showing symptoms like vomiting, diarrhea, anorexia, enlarged tonsils, ulcers, and fever.

Arizona, among other southwestern states, is well-known for its dense population of rattlesnakes. Despite rarely being fatal, the rattlesnakes’ venom is potent enough to cause muscle damage, internal bleeding, and infernal pain. And if it’s not treated quickly, your best friend may end up with a complete amputation.

The good news is, rattlesnakes don’t typically bite unless it’s provoked. Discourage your dog from digging under fallen logs, rocks, or boulders because rattlesnakes usually hide there.

Would the boots be enough? Of course not! Rattlesnakes’ agility and speed allow them to bite parts as high as the neck. To keep the risk at bay, your dog must wear snake gaiters and a protective tactical vest. 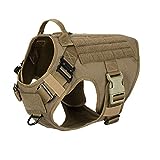 How to Measure Your Dogs Feet

As you might imagine, a pair of poorly-fitting boots will do more harm than good. Not only will they impair walking, but it may also catch thorns and prickles that would keep poking the dog’s paws.

But how can you measure your dog’s paws? The process is fairly simple.

Although most brands provide shoes in one length, some manufacturers release long alternatives that provide extra protection. With a fabric tape measure, you can easily measure the length of the boots between the toes up until the required height.

By now, I hope I was able to illustrate how indispensable dog boots are. If you’ve decided to get a pair, start by considering the following products.

If you want to be 100% ready for whatever you might face during your hike, these boots from Ruffwear should be your best bet.

First of all, the outsoles of these shoes are made by Vibram, a leading manufacturer in the world of human rugged shoes. Their non-marking soles provide the best balance between traction and flexibility to suit almost all terrains.

The upper is fully geared toward comfort. Thanks to the tightly woven air mesh, your dog’s lovely paws will be properly aerated throughout the whole hike.

By the nature of the beast, such construction must lie on the expensive side — the two pairs will cost you about triple the average! 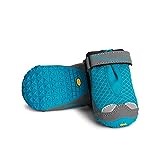 If you think the short design of the Ruffwear won’t be protective enough, you’ll probably love this one from Bark Brite. All of the 5 sizes are designed to extend above the soles by about 4.5”.

To keep the tightness optimal, Bark Bite decided to equip these shoes with double velcro straps. They also made them reflective to facilitate hiking in low-light conditions.

Build-wise, these boots aren’t the best. Their rubber soles are a bit thinner than they should be, thereby limiting their thermal isolation.

The upper is fabricated from solid neoprene that has excellent tightness, yet awful breathability. Then again, neoprene would be excellent if you’re living in a cold northern state.

Almost all dog boots come with reflective straps with which you can keep track of your dog. But if you love night hiking, those puny straps won’t cut it. These boots from All For Paws have the biggest part of their upper colored in reflective green — the entirety of your dog’s paws would be visible from a distance.

I like that the uppers are made from synthetic leather. It should feel way softer on the dog’s paws than neoprene or even mesh. But as you might imagine, they’ll be best suited for frosty winters rather than scorching summer.

The outsoles aren’t that special. They’re made of the same moderately-thick rubber that’s typically found in most of the other boots. 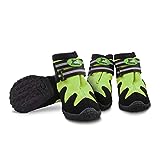 Bonus: How to Train Your Dog on Wearing Boots

I hate to break it to you — your dog will probably hate the boots you bought him, at least for the first few days. Most dogs will keep shaking their paws and kicking their legs in an effort to take off those boots. Others may give in faster but will maintain an absolutely weird gait for a while. That said, you should get the boots and start training your dog well before your planned hike.

Here is the best way to train your little pooch on accepting his new boots.

Step 1: Start by Handling the Paws

Keep the boots away for now. Your dog must be comfortable with the feeling of something encircling his paws. To do that, hold one of your dog’s paws for 5 minutes. At the same time, keep your dog distracted by flooding him with treats and affection.

If your dog angrily storms out, let him go and continue the training later.

It’s better not to put the boots on your dog’s paws right away. Instead, introduce them slowly to let him get accustomed to their shape and smell.

Some breeds get bored faster than others. To be on the safe side, keep the first wearing trials short and filled with lots of treats. A maximum of 2-3 minutes should be ideal.

Do dogs need hiking boots? That’s an easy yes. Why? Because without them, your dog’s paws will be vulnerable to physical lacerations, thermal insults, infections, snake poisoning, etc.

Remember, take it easy on your dog. If he doesn’t seem to like wearing them, don’t fret; he’ll get used to them before you know it.