Imagine this: you’re in the middle of a week-long backpacking trip in Alaska, you turn the corner on the trail and all you can see is a gigantic brown bear staring back at you. Do you try to run and hide? Or do you stand your ground and use that bear spray you were told to buy? At that moment, you might not have time to ask yourself, “Does bear spray really work?” but you should certainly know the answer to that question before you bet your life on it. 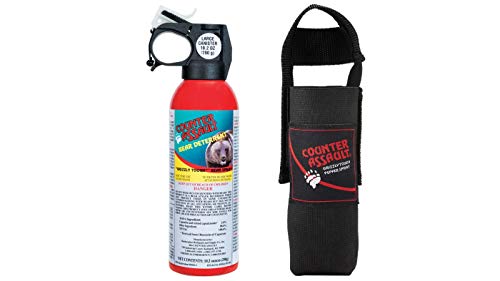 There are really only two main bear sprays that are widely available on today’s market – Counter Assault and UDAP, though there are some smaller brands available. They both use the same active ingredient (oleoresin capsicum) and the same chemical, R134a, to propel the capsicum out of the can.

The main difference between the two is the “carrier” chemical used to hold the capsicum in an evenly mixed state so you don’t have to shake the can before you spray it on a bear. The chemical that each company uses as a carrier is a closely held trade secret, but it doesn’t really make too much of a difference from a practical standpoint.

What is important, however, when deciding between different bear sprays is to look at the spray range, how long it takes to empty the can, the can’s expiration date, and the can holster. This information is more important than a specific brand name in determining what a good bear spray is.

The spray range is basically a measure of how far of a reach a can of bear spray has when it’s discharged. The longer the spray range, the farther away you can hit a bear, which is great for neutralizing the threat before it has a chance to hurt you.

The length of time it takes to empty the can, on the other hand, is a measure of how quickly the bear spray can actually get onto a bear’s face. The faster the can empty time, the more quickly you can stop a bear in its tracks.

When it comes to expiration dates, there are some bear sprays that do, indeed, expire as they can lose pressure over time and be less effective. Some brands, such as Counter Assault, however, have no expiration date, which is an added bonus for those of us who can never remember to replace expired gear or just don’t want to have to buy a new can of bear spray every few years.

Finally, every bear spray comes with its own holster to help you carry it. Each bear spray manufacturer makes its own specific holster, so it’s important to find one that you like and will actually wear. Having your bear spray tucked away in your pack or in a water bottle pocket does you no good as you won’t be able to quickly deploy it in an emergency.

How to Use Bear Spray

Bear spray is designed to be easy to use, but you still need to learn the basics before you use it for the first time. Even though we hope to never use bear spray, you should know what to do should the time come.

First things first if you see a bear, make noise and stand your ground. In the animal world, food runs away when scared, and the last thing you want to be is bear food. If you’re in a group, get everyone together and make yourselves look really big. All of these actions can help scare a bear away.

If the bear doesn’t run away quickly, then you need to be ready to potentially use your bear spray. Stay together in your group and stand your ground. A bear that’s irritated or scared might get up on its hind legs to make you run away, but it’s important to stay right where you are and get your bear spray at the ready.

At this point, if a bear still feels threatened, it might charge you. Bears move really fast and can cover a lot of ground in just a few strides. Although many bear charges are just bluff charges (which means they’re not actually trying to hurt you), you need to treat a bear charge like the real deal.

Hopefully, your bear spray is already in your hand if a bear is charging you. Use your thumb to pop back the safety cover. Depress the trigger only once the bear is within about 30 feet of you, or it won’t be effective. Continue spraying the bear spray until the bear backs off, which should be nearly instantaneous.

The bear will likely run away, at which point, you can move swiftly (don’t run) to get away from the area. Discharged bear spray, it turns out, actually attracts bears, because it’s pepper (aka food), so don’t hang around the area for too terribly long if you can help it.

Bear spray is very effective when used properly. A study that looked at 20 years worth of bear spray discharges in Alaska found that bear spray managed to stop a bear more than 90% of the time. Even when someone who used bear spray was injured by a bear, those injuries tended to be quite minor. Plus, even when the wind interfered with a bear spray’s accuracy, it still managed to scare off the bear.

On the other hand, another study that looked at the use of firearms to scare away bears found that firearms are pretty much useless in these scenarios. Unless someone trains regularly with their firearm, is using a high-powered firearm of an appropriate caliber, and can accurately place a shot right onto a bear’s face, they’re unlike to actually hit the bear when they’re all jacked up on adrenaline and nerves as they’re actively being attacked.

Never, I repeat never, spray your tent, clothes, or anything else with bear spray thinking that it will deter a bear! Bear spray is in essence pepper, which is food to a bear, and may actually attract bears.

More often than not, people who try to use firearms on bears in close range just manage to wound a bear and make things worse. Bear spray, however, simply irritates the bear and scares them away, so there’s no long term damage.

Is Bear Spray the Same as Pepper Spray

Yes – and no. Pepper spray and bear spray are both made with oleoresin capsicum, which is the chemical found in chili peppers that makes them sting and irritate our mouths when we eat them.

Pepper spray is made for non-lethal self-defense against humans, where the objective is to incapacitate a threat without making them suffer permanent harm. When used effectively and sprayed onto the eyes and skin, it causes a number of not-so-fun sensations, like an intense burning pain, tearing of the eyes, eyelid swelling, temporary blindness, and difficulty breathing.

These effects can last significantly longer than 20 minutes, so it’s very effective at neutralizing a threat for long enough to allow you to run away.

This is because it takes a bit more of a punch of pepper spray to neutralize a bear threat than to neutralize a human threat. While this is, indeed, true, what we need to remember is that when pepper spray is used on humans, it is because a human is purposefully trying to attack you, while many bear charges, although scary, are actually just bluff charges.

Many people initially think that this is a pretty low concentration of pepper, but it’s important to remember that the point of using bear spray is to irritate a bear enough to cause it to back off. We don’t want to cause the bear serious pain or incapacitate the bear, which could cause it long term harm. The vast majority of the time bears attack because they feel threatened – not because they actually want anything to do with us.

When you’re in bear country, make sure that you have BEAR SPRAY and not just pepper spray meant for deterring humans and dogs!

So, the short answer is, yes, bear spray and pepper spray are, effectively the same thing. But, bear spray is better for use on bears and wildlife because it’s designed to not cause long term harm. Plus, bear spray cans usually reach a much farther distance than pepper spray does and spray out at about 75 miles per hour, which is useful for stopping a bear before it can actually cause you any harm.

Finally, pepper spray made for law enforcement or self-defense use usually sprays in a more direct pattern, so it gets on fewer people. This is different from bear spray, which is designed to cover a fairly wide area to increase the chances that you hit a bear in the face, even when you’re nervous and that bear is charging at you.

What Else Does Bear Spray Work On In the past, bear spray has been used on mountain lions, wild pigs, dogs, and moose. People are actually more likely to spray a moose than a bear with bear spray, as our antler-sporting friends tend to be quite aggressive. There’s even been a reported case of bear spray being used successfully on a rattlesnake, but let’s hope we never have to use it.

As soon as bear spray is released from the canister, hits the animal’s face, their body starts producing copious amounts of mucus to help expel the pepper as they start crying, wheezing, and coughing. This process happens once bear spray is used on nearly animal with these mucous membranes, whether or not they’re actually a bear.

Bear sprays are a good way for you to protect you and your family from aggressive bears and other wild animals, including people. However, good common sense and careful planning should always be used. If you’re thinking of camping or hiking in an area where bears are known to frequent regularly, don’t!  Bears sprays are meant for an “in case of” scenario and should never be a primary source of protection. With that being said, bears spray does work and when used correctly, can be an effective way to ward off bears!